The act of trafficking in human beings can be divided into three major steps:

According to German Penal Code §232 human trafficking with the purpose of sexual exploitation is assumed, if the personal or economic predicament or helplessness of a person caused by the stay in a foreign country is exploited, and if this person is recruited, transported or given housing with the purpose of exploiting this person.  The person, who forces someone into prostitution is not necessarily the same person, who managed the recruitment or transport.The arrangement of the exploitation of a person in prostitution, is covered by §232a StGB as “Forced Prostitution”. This includes, to bring the victim into prostitution or urge to continue with prostitution by exploiting the predicament, the helplessness caused by the stay in a foreign country, or the juvenile age of younger than 21 years. The Punishment is fixed from six months of imprisonment to ten years. The punishment is more severe, if 1. the victim is a child, 2. If the offender through the act seriously abuses the victim or places the victim in danger of death, or 3. the offender commits the offence on a commercial basis or as a member of a gang whose purpose is the continued commission of such offences.  Customers in prostitution also make themselves punishable according to German law, if they knowingly buy the services of a victim of human trafficking and thereby exploit the plight of this person (§232 Criminal Code, Paragraph 6).

233 German Penal Code covers cases, in which the sexual exploitation or other forms of human trafficking are committed by deprivation of liberty (being locked or kidnapped etc.).

In the recruitment phase, the victims are betrayed, so that they are made false promises about the nature of work or the conditions of work. Even in those cases, where the victims knew they would have to work in prostitution, it occurs, that they are confronted with working conditions they did not agree to, or that they are forced to continue work under these circumstances. Especially African victims are put under pressure by the traffickers with exorbitant, and fictional high money claims up to 50 000 Euro to bay back the costs for their journey to Europe. The women have to earn this enormous sum in prostitution. Further means of coercion are: taking away the documents, physical or psychological violence, deprivation of food, blackmailing, surveillance, threats to do harm to family members and to take away all the earnings of the victims.

The following graph shows, that the majority of the victims in Germany come from European countries (Germany, Bulgaria, Rumania, Hungaria). From the African continent, most victims originate from Nigeria. 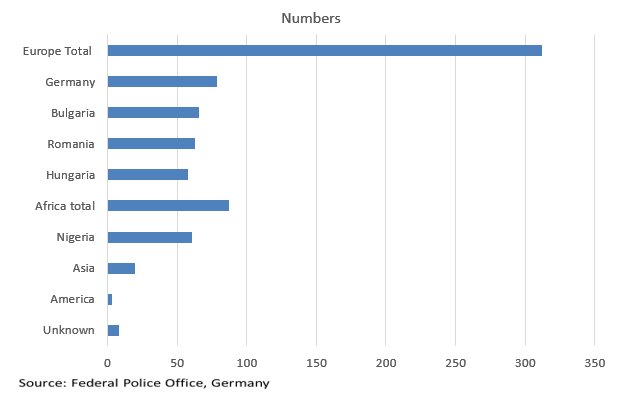 The recruitment phase is usually very complex and it requires certain social and psychological skills on behalf of the recruiters. These analyse the vulnerabilities of the targeted persons and offer them what they have identified to be lacking. Especially in the cases of young girls, this involves the exploitation of their innocence, the lack of life experience and the lack of strong and healthy family ties. Thus, the most common method in such cases is the “lover boy” method.

By means of fraudulent promises and exposure of inexistent feelings of love, men pull the victims into love stories and make them fall in love with them. After the girls fall into the carefully placed trap, the next phases follow: transportation and exploitation.

Emese from Hungary - Betrayed by the family

While the above lines have only illustrated the very typical East – European – German cases, recruitments can be very different ranging from false promises of a better life to use of force, exploitation of addictions and/or administration of drugs, or even abduction.

Maria from Romania - The Loverboy method

The “Loverboy” method is one of the most common methods used by such “charming princes” like Andrei to recruit vulnerable women like Maria and force them into prostitution. For women like Maria, breaking free from the chain of human trafficking is always difficult. The barriers which arise are linked to fear of consequences, lack of trust in people, lack of prospects, lack of financial resources, lack of knowing a foreign language.